The first woman graduate of a United States medical school was born in Bristol England in 1821. Elizabeth Blackwell came to this country as a child and originally had no interest in medicine. But when a dying friend told her, “I would have been spared suffering if a woman had been my doctor”, she found her calling.

By the most recent statistics published by  the Kaiser Family Foundation, 48% of United States medical school graduates  are women; in some states, over 50% are women. If that trend continues, eventually at least half of all practicing physicians in the United States will be women. Currently about one third are female.

The first woman graduate of a United States medical school was born in Bristol England in 1821. (thank you, UK readers). Elizabeth Blackwell came to this country as a child and originally had no interest in medicine. But when a dying friend told her, “I would have been spared suffering if a woman had been my doctor”, she found her calling.

She was denied admission to multiple medical schools. The Geneva Medical College of New York submitted her application to the student body for a vote, and, as a joke, they voted to admit her. Well, the joke was on them as she enrolled, completed medical school and graduated in 1849.

With her sister, Emily Blackwell , who also  graduated from medical school, and a German physician, Marie Zakrzewska, they opened and ran the New York Infirmary for Women and Children in 1857.

Dr. Emily Blackwell  managed the Infirmary for 40 years. Dr. Marie Zakrzewska moved to Boston when she founded the New England Hospital for Women and Children, which trained  women physicians and cared for the poor.

Due to failing health, Dr. Elizabeth Blackwell retired from practice in the 1870s.

The Physicians Mom Group (PMG) declared Dr. Blackwell’s birthday February 3 as National Women Physicians Day. This day celebrates all the significant contributions that women physicians make daily, none of which would have been possible without Elizabeth Blackwell. 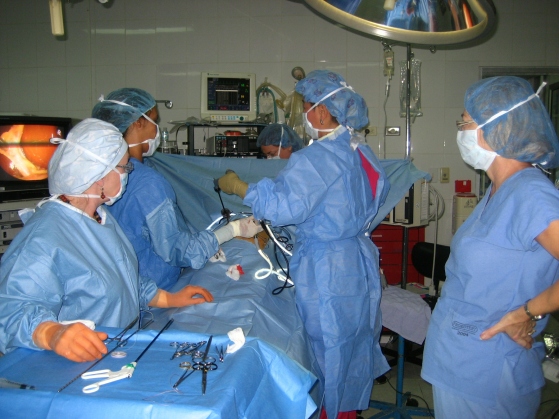 women doctors and nurses operating during a medical mission trip

Dr. Crumpler graduated in 1864, becoming the first African-American woman to earn the M.D. in the United States.  After practicing in Boston, she moved to Virginia where she and other black physicians cared for freed slaves, who otherwise would have had no access to medical care. In 1883 Dr. Crumpler wrote a book of medical advice for women and children, titled Book of Medical Discourses, one of the earliest medical publications by an African American.

More recently, a woman physician’s work has impacted the lives of countless babies and their families. If you have had a baby, or been born within the past 60 years, you benefited from the work of Virginia Apgar, M.D.

She was neither an obstetrician or a pediatrician, but an anesthesiologist. As she observed deliveries of infants she proposed a scale to rate how well a newborn was adapting to life outside the mother.

So a newborn had a potential score as low as 0 and as high as 10.

The higher the score, referred to as the Apgar score, the more likely the baby was healthy and would do well. The lower the score meant the baby was in trouble, and needed intensive medical attention.

After testing the use of the rating scale over several years, doctors starting using it routinely; so for the past 50-60 years almost all babies have been “graded” with an Apgar score at birth. The Apgar score  is used widely throughout the world.

Dr. Apgar, who played violin and cello in her college orchestra, was appointed the first full professor of medicine at Columbia University and also was a director for the March of Dimes.

The National Library of Medicine profiles

these and many other women physicians at

Changing the face of Medicine –

exploring the HEART of women physicians

8 thoughts on “Why women physicians are good for health care”