In the battlefields of Belgium during World War I, poppies grew wild amid the ravages of war. The overturned soils of battle covered the poppy seeds , allowing them to grow and forever serve as a reminder of the bloodshed of war. 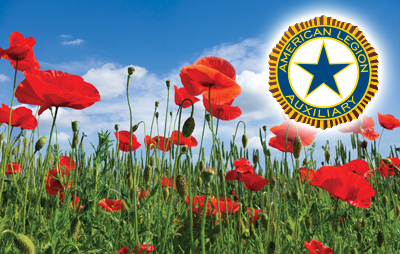 Being the daughter and wife of United States military veterans, I appreciate all the other families of our country’s veterans. With sadness and appreciation, I remember all the men and women who left home to serve our nation and never returned home.

We celebrate the unofficial start of summer at the end of May as a “holiday” weekend. However, Memorial Day is the day Americans set aside to honor those brave men and women who lost their lives while defending our freedom. It is our duty to honor their sacrifices, to pray for their families, and to bow our heads in recognition of their service.

The American Legion Auxiliary adopted the poppy as a symbol of this remembrance.

In the battlefields of Belgium during World War I, poppies grew wild amid the ravages of war. The overturned soils of battle covered the poppy seeds , allowing them to grow and forever serve as a reminder of the bloodshed of war.

Out of this conflict came a poem, from which also came the association with poppies .

Dr.McCrae was an English and math teacher, as well as a poet, before he attended medical school. He moved to England and was practicing there when World War I broke out, and he was called to serve as a brigade-surgeon.

I suspect that as a physician, he was deeply  pained by  treating the wounded, and the lossong the ones he could not save.

“In April 1915, McCrae was stationed in the trenches near Ypres, Belgium, in an area known as Flanders, during the bloody Second Battle of Ypres.

In the midst of the tragic warfare, McCrae’s friend, twenty-two-year-old Lieutenant Alexis Helmer, was killed by artillery fire and buried in a makeshift grave.

The following day, McCrae, after seeing the field of makeshift graves blooming with wild poppies, wrote his famous poem “In Flanders Field,” which would be the second to last poem he would ever write.”

This poem is in the public domain.

exploring the HEART of service