Kristin Chenoweth was born and raised in Oklahoma; unlike me, she is an award winning singer and stage, screen, and television actress.  She is loved and admired here in our home state, being an inductee into the Oklahoma Hall of Fame, as well as the Oklahoma Music Hall of Fame.

A LITTLE BIT Wicked:Life, Love, and Faith in Stages

a memoir by Kristin Chenoweth

Like me, Kristin Chenoweth was born and raised in Oklahoma; unlike me, she is an award winning singer and stage, screen, and television actress.  She is loved and admired here in our home state, being an inductee into the Oklahoma Hall of Fame, as well as the Oklahoma Music Hall of Fame.

flies the flags of Oklahoma, the United States, and Broken Arrow.

I have been to the Broken Arrow Performing Arts Center in Oklahoma where she conducts an annual Broadway Bootcamp.  But I didn’t know much about her until I listened to the audiobook version of her memoir A Little Bit Wicked: Life, Love, and Faith in Stages, read by her. Now I almost feel like we are best friends.

From the opening paragraph, Kristin is candid, no nonsense, transparent, and hilarious. She’s one of those “you never know what she’s going to say next” people and you don’t want to miss  any of it. She is just as up front sharing her failures as she is celebrating her successes.

This part of the country is referred to as the “Bible belt” and Kristin admits to reading and believing it. So don’t be surprised when she mentions and even occasionally quotes from the Bible in her memoir. Like when she talks about the circumstances of her birth.

Kristin was adopted at birth by a couple who had one child but were unable to have more. She describes herself as the product of “forbidden love.” Her biological mother was an unmarried flight attendant who became pregnant. Instead of  abortion or  raising a child alone, she opted for adoption. Kristin joined the Chenoweth family soon after birth.

Her adoptive parents have loved her and supported her career and she is immensely grateful to them.

Rather than being angry or bitter, Kristin is grateful to this woman who she says was kind enough to “let me go”. To illustrate, she tells a Bible story from the Old Testament about the wise King Solomon. It goes like this.

One day two women (prostitutes in some Bible versions) came to King Solomon,  and one of them said:

“Your Majesty, this woman and I live in the same house. Not long ago my baby was born at home, and three days later her baby was born. Nobody else was there with us.

One night while we were all asleep, she rolled over on her baby, and he died.

Then while I was still asleep, she got up and took my son out of my bed. She put him in her bed, then she put her dead baby next to me.

In the morning when I got up to feed my son, I saw that he was dead. But when I looked at him in the light, I knew he wasn’t my son.”

The other woman shouted.

“The dead baby is yours. Mine is alive!”

They argued back and forth in front of Solomon,  until finally he said,

“Both of you say this live baby is yours.  Someone bring me a sword.”

“Cut the baby in half! That way each of you can have part of him.”

“Please don’t kill my son. Your Majesty, I love him very much, but give him to her. Just don’t kill him.”

The other woman shouted,

“Go ahead and cut him in half. Then neither of us will have the baby.”

“Don’t kill the baby. She is his real mother. Give the baby to her.”

Everyone in Israel was amazed when they heard how Solomon had made his decision. They realized that God had given him wisdom to judge fairly.

She compares her birth mother to the woman who loved her child so much she would rather lose her than see her die. She believes,  “The ultimate test of love is letting go.”

Kristin won’t try to find her birth mother, refusing to intrude  on her privacy. She hopes she is happy, has a family, and knows how blessed Kristin’s life has been.

Unlike many entertainment celebrities, Kristin doesn’t seem to have any skeletons in her closet; she has avoided problems with alcohol, drugs, abusive relationships,  financial problems, or other scandals.

There is no cure for Meniere’s except a radical ear surgery which might leave her with hearing loss. As a professional singer she doesn’t want to risk that, so she copes with the condition with humor and an unwillingness to let it stop her from fulfilling her work commitments. 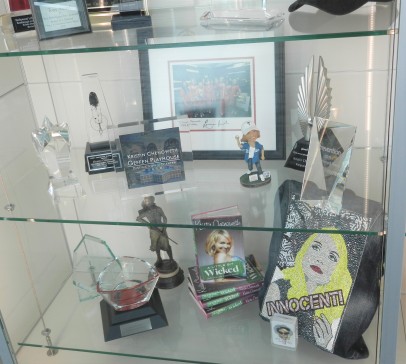 Kristin has her serious side, evident as she describes singing at her beloved grandfather’s funeral, and supporting her mother through breast cancer diagnosis and treatment.

She sometimes feels caught between  the Christian community which criticizes her liberal social views and her friends with unconventional lifestyles who are turned off by her uncompromising Christian witness. As she puts it, she wants to love and help everyone in the same way Jesus did; she doesn’t want to take sides or exclude people just because they are different.

Kristin’s gown from her Broadway show is displayed in

Kristin has and still does perform on the stage, movies, and television, and records albums. She won a Tony award as Sally Brown in “You’re a Good Man, Charlie Brown.”

I hope you will read, or better yet listen to Kristen’s memoir.

She may be “A Little Bit Wicked”, but I think you will love her as much as we do here in Oklahoma.

These are affiliate links which support this blog in sharing the HEART of health.

Buy on the iTunes Store THE ART OF ELEGANCE  album

And find it on Amazon

Thanks for joining me to meet Kristin Chenoweth and see a little bit of our home state.

After hearing how wonderful it is, I finally saw the touring production of WICKED and it is every bit as “wicked” as everyone says.

Although Kristin no longer performs in it, other actresses bring Glinda and Elphaba to life with singing, non-stop action, and gorgeous costumes.

It may be based on a children’s story, but WICKED is a touching saga of love, friendship, betrayal, courage, and forgiveness. Don’t miss it if you have a chance to see it.

You can stream the WICKED album free with Amazon Prime (affiliate link).

Do you wonder why Kristin’s home town is named Broken Arrow? Find out here.

History of the name of Broken Arrow