The Survivor Tree, an American elm, survived the blast and is part of the Memorial.What was once an ignored, unassuming urban tree is now an iconic symbol of hope. 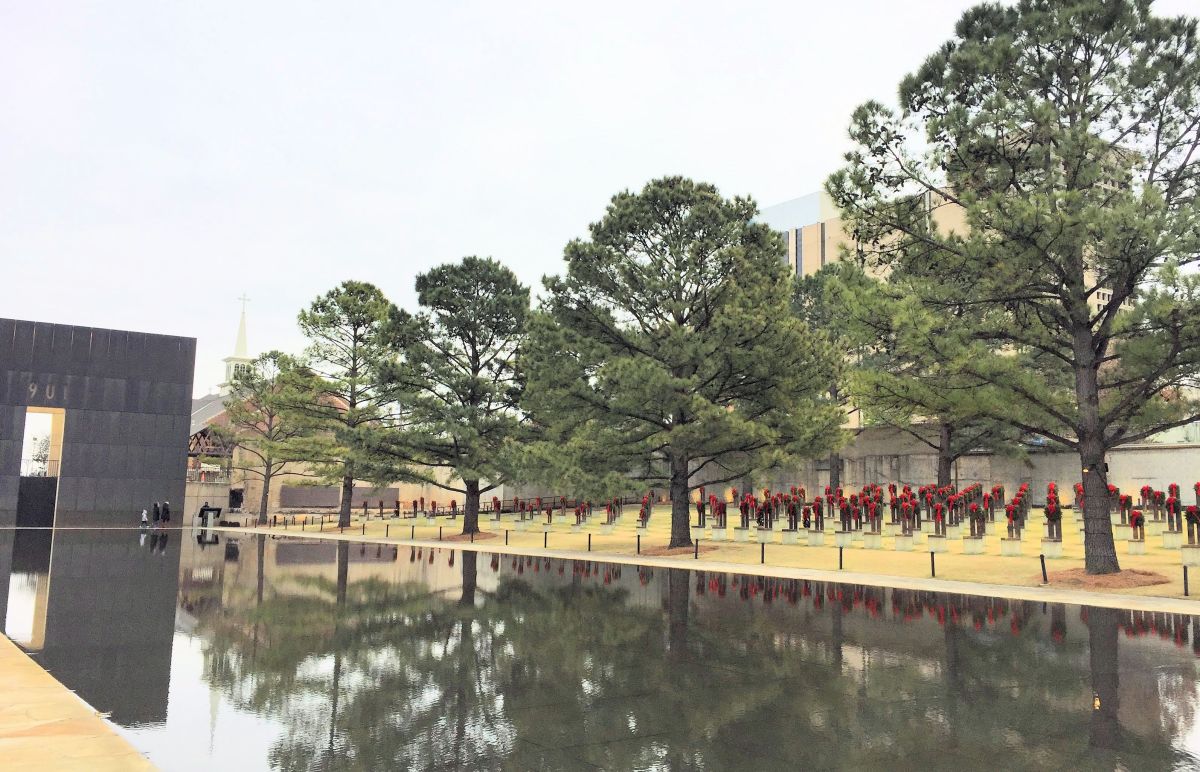 At 9:02 am April 19, 1995 a bomb exploded at the Murrah Federal Buidling in Oklahoma City, Oklahoma, destroying one side of the building, damaging several adjacent buildings, injuring 680 people and killing 168 people, including 19 children.

A memorial and museum now stand in silent tribute and remembrance.

The Reflecting Pool and Field of Empty Chairs; the museum entrance, and window overlooking the memorial

sections of the chainlink fence where visitors have left mementos

There is chair for each person who died that day, 168.

What was once an ignored, unassuming urban tree is now an iconic symbol of hope.

Tiles painted by children all over the country, gifted to the museum, and displayed at the museum entrance.

The Oklahoma City National Memorial and Museum is privately funded. The memorial is free and open to the public. An admission is charged to tour the museum.

It does not receive any annual operating funds from the federal, state or local government.

sharing the HEART of remembering those we have lost to violence

Twenty three year old Madison Naylor was among the infants being cared for at the YMCA daycare located next door to the federal building at the time the bomb exploded. The building was heavily damaged but she and the other children survived. 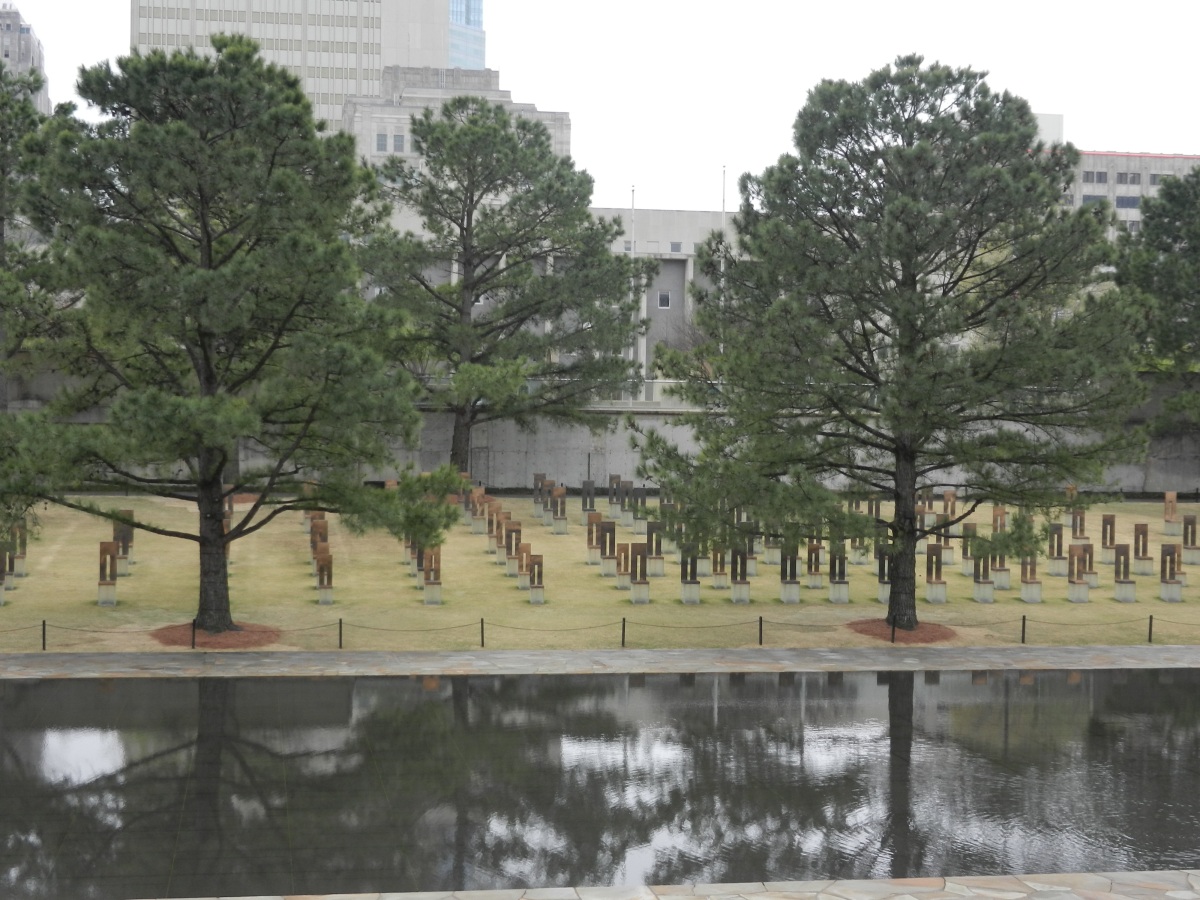 April 19, 2019 marked the 24th anniversary of the terrorist bombing of the Alfred P. Murrah Federal Building in Oklahoma City, Oklahoma. Oklahoma City is the capital of my home state and was my home for 7 years while I attended medical school and completed my residency in Family Medicine at the University of Oklahoma Health Sciences Center.

From the bombing, 168 people died, hundreds were injured, and our state and our nation were changed forever. Never had there been such an act of horror and carnage on U.S. soil.

I’ve written here about the bombing and showed you pictures from the site which is now a memorial and museum. I’m doing that again but this time with news about 4 women who have turned the event into something positive.

a past survivor, now a future doctor

Twenty three year old Madison Naylor was among the infants being cared for at the YMCA daycare located next door to the federal building at the time the bomb exploded. The building was heavily damaged but she and the other children survived.

“I remember when I was very young, I had a feeling that I had been really close to death, …I hope I can be something good that came from something so horrific.”

Madison grew up learning about the bombing and about medicine. Her father and aunt are both physicians, and now she is a first-year medical student at my alma mater, the University of Oklahoma College of Medicine.

“I know the bombing is still a part of people’s lives here. It’s humbling to be associated with such a tragic event. I hope that I can be a positive face going forward.”

The bombing changed not only Oklahoma City, but also our state, and our entire country. It was the worst terrorist event on U.S. soil until 9/11. All of us were touched in some way, but especially 3 women who worked in the Department of Psychiatry and Behavioral Sciences.

“None of us was thinking about studying disasters…But we kept studying …the Oklahoma City survivors over the years..Then started helping with disasters elsewhere.”

Dr. Pfefferbaum, along with colleagues Phebe Tucker, M.D., and Sandra Allen, Ph.D. treated and studied trauma victims from the bombing and shared their findings with other doctors who use it to treat survivors around the world.

Dr. Allen developed an intervention to help children of trauma process their thoughts and feelings. Sometimes children think they have to hide their feelings or act out when they hare hurting. This program helps them process those feelings and learn how to cope. You can read the details of this program at this link-

Listen to the Children

photos in this post taken by Dr. Aletha in Oklahoma City, Oklahoma

Thanks to OU Magazine and KFOR for sharing these stories.

I am delighted that Janice Wald, author and blogger at Mostly Bloggging, called this her “favorite post ” when I submitted it at her Inspire Me Monday Linky Party. Please visit Janice’s blog where you can learn about writing, blogging, productivity, marketing, and more.


It isn’t often that I see news-related posts left here and even rarer that, when I do, they are so inspirational. The post really exemplifies the expression, “Turn lemons into lemonade.”